The 3 Excursions you should definitely do in Sardinia

The 3 Excursions you should definitely do in Sardinia

It’s difficult to choose amongst so many attractions, but a mix between sea, archaeology and nature may be the right choice.

It is a good idea to begin with the sea as Sardinia became famous due to its sea unique colors and one could never imagine to visit the island without making at least one excursion to see places will never forget for the whole life.

The Sardinian sea is beautiful everywhere, even if its color and environment changes depending on the part of the shore. Different colors, different tides and different panoramas. There are great places to be visited in the whole Sardinia, but if we have to choose one, the choice goes to the uniqueness of the panoramas and its colors: La Maddalena archipelago.

The La Maddalena archipelago offers different kind of excursions, being the most typical the sailing ship one. A trip that visits some of the most beautiful islands of the archipelago, as Spargi and Budelli. Dipending on the route the sailer takes one can see unique beaches as Cala Soraya and Cala Caprese, where the sea is crystal green and has its color enhanced by the red rocks that frames the beach.

The excursions depart from La Maddalena island, from Palau and from Poltu Quatu. This kind of excursion usually lasts for an entire day and the lunch is prepared while the guests stay at the beach and then served on board.

If the trip finishes early, or if one decides to dedicate another day to this area, it’s interesting to explore the Maddalena island by car, discovering small coves that uncover their beauty through their astonishing sea color. It is possible to reach Caprera where, dipending on the time of the day, it is possible to visit Garibaldi’s house.

Caprera is connected with la Maddalena by a bridge and it is the second biggest island of the archipelago, but considered by most of the people the first one for beauty due to the uniqueness of its shores and beaches.

The Gorropu canyon is 1,5 km long, 500 m deep and at its end it narrows to reach just 4 meters of width.

This kind of excursion requires a minimum of physical training because of the 3 hours walk on rocks, even if using the specific shoes.

But the effort is pretty repaid. Reaching the bottom of the canyon, the walk is on big white smoothed rocks in the middle of rock walls 500m high, and the silence and the close contact with nature repays anyone for the effort needed to reach this place.

The Gorropu canyon have some legends regarding it that are still alive in the nearby villages. One legend says that in Gorropu lived the Temptation and that people used to go there to offer their own soul in change of material riches. Another legend says that it is possible to see the stars during the day from the canyon. 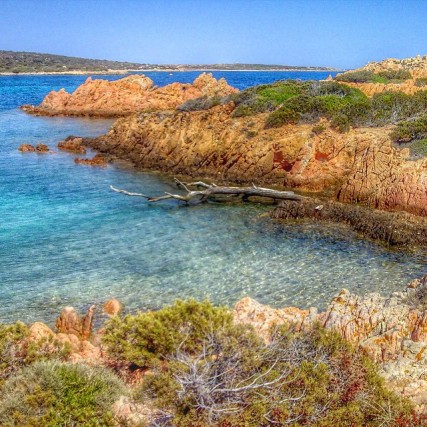 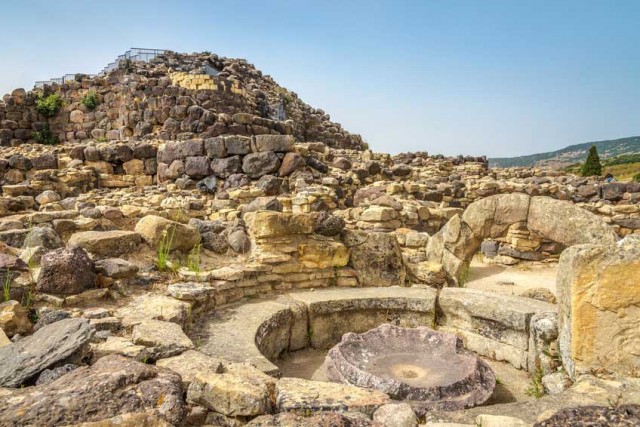 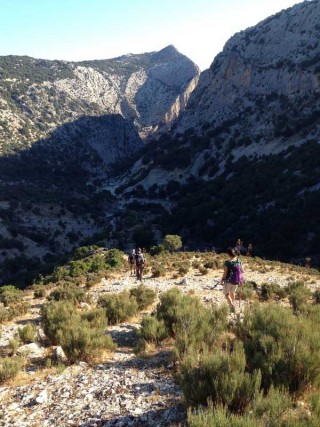 Sardinia is known also for the many nuragic rock buildings (nuraghe) that are testimonials of the nuragic civilization. It is supposed that there may be around 8000 spread all over the island. No researchers have yet a final conclusion regarding their utility, but all of them agree that they were built in the II millennium BC (from 1800 to 1100 BC).

The best excursion to visit a nuraghe is surely the one to the Nuragic Village Su Nuraxi, in Barumini area, as it is considered the biggest nuragic village of the world. Its uniqueness is confirmed worldwide since 1987 when it became UNESCO Human heritage.

The whole nuragic area was brought to the public during the ‘50ies, as a result of the excavating works conducted by the archaeologist Giovanni Lilliu.

The oldest nuraghe structure is composed by a central tower with three overlying rooms. Later, in the late Bronze Age, 4 more towers were built together with a town-wall, all around the central tower. Still later, on Iron Age, the village received another town-wall.

The differences between the constructions lead to the probability of a social hierarchy. There are no confirmed theories, but some researchers believe that the oldest part of the nuraghe were destined to a religious purpose while the towers built later were used for military and storage uses.

The excursion to Barumini was recently enriched with the Su Nuraxi ‘e Crescia addition. This nuraghe was discovered during the recent 90ies when an old noble house from the Sardinian-Aragonian, called casa Zapata and built during the 1500 years above the old nuragic building. Today it hosts the Polo Museum Casa Zapata, with three distinct areas: archeological, historic-archivist and ethnographic.

La Maddalena – To visit La Maddalena archipelago, a good choice is Resort Valle dell’Erica, a great resort for all ages;

Su Gorropu – To visit Gorropu you can sllep at Su Gologone, a beautiful experience hotel close to a known spring that has its same name;

Barumini – You can stay at the modern T Hotel in Cagliari, with all comforts including a SPA.