Selfie on the Rocks in Sardinia

Selfie on the Rocks in Sardinia

Some of the emotions that one can live in Sardinia simply cannot be told or “frozen” in a picture. This is what happens when for example you see some the many strange-shaped rocks visible in Sardinian landscapes, valleys or beaches. You will probably let your imagination run free when looking at some of the granite rocks of the Gallura province, modelled as they are by centuries of strong winds, and maybe immediately relating them to animals, objects or anything else your mind may suggest.

Many aspects of your holiday in Sardinia will be surprising.


It often happens to me, although I am Sardinian, to venture out and explore new places and to find myself absolutely bewitched by the colours of a sunset, the cliffs falling into the sea or the dancing waves on a breezy day.


There are sensations which you cannot describe in a page on a blog: that particular smell when walking in the countryside, or that ticklish pleasure of being barefoot on a beach at dusk, or the taste of a ripe fruit just picked from a tree, or the sweet sound of the water caressing the shore.


One the emotions that cannot be told or made immortal in a picture is the sensation you feel when seeing the strange and unexpected shapes of rocks in many Sardinian valleys and beaches. Landscapes that suddenly open up before you, maybe after going round a bend in the car, or a trail or during an excursion by boat.


You will probably come across places like the Gallura province, where ancient rocks modelled by wind abound. You will come to relate their strange shapes to animals, object or anything your imagination may dictate.


So, which are Sardinia's most famous rocks?


Of the vast number present on all the Sardinian territory, we have chosen to list three.

Bear's Rock (Roccia dell'Orso), Palau. This “sculpture” looks like a bear on all fours, with its head pointing towards the sea and it is both visible from a boat or from land. It's one of Sardinia's most important natural monuments and it was mentioned as early as the II century A.D. by the Greek geographer Tolomeus, who said the shape of the rock used to frighten seafarers. The rock also gave the name to the area where it lays. You can find more specific information in the page dedicated to Palau. 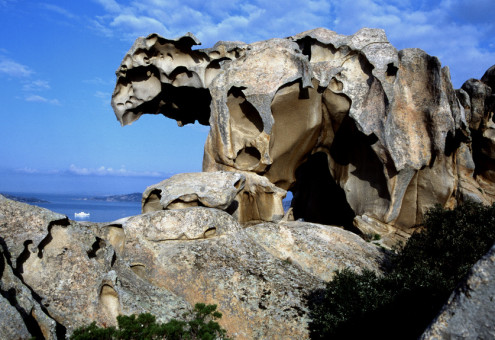 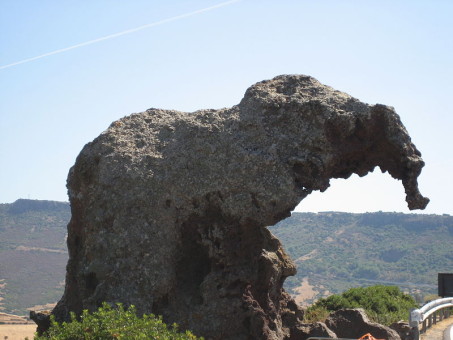 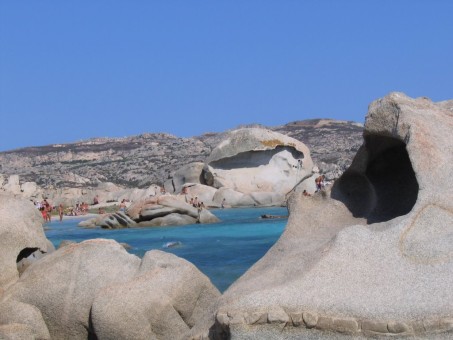 Elephant's Rock (Roccia dell'Elefante), Castelsardo. This rock is as famous for its shape as it is for its archaeological importance. It is a so called Domus de Janas which dates back to the Pre-Nuragic Era. The Domus de Janas, in English “fairy house”, are tombs which are dug into the rock and there are more than 2400 over the whole island, one every square kilometre, and are often connected between them by underground tunnels. The Elephant dominates a beautiful valley which will bring you back thousands of years. More information on the page www.wonderfulsardinia.com/it/destinazioni/golfo-asinara/castelsardo/ .

Octopus Head (Testa del Polpo), La Maddalena. This rock gives the name to one the most beautiful beaches on the island of La Maddalena. Located on its southern coastline, it is possible to admire it from the sea, as well as getting there on foot. It is by a sandy beach, surrounded by large rocks which enhance the magic of the place, and one of these is the Octopus Head.

As well as the ones listed above, there are also the Bird of Prey (Rapace), Arbus; the Dead Man's Mother (Madre dell'Ucciso), Orotelli; the Witch's Head (Testa della Strega), Spargi; the Seal of Porto Faro (la Foca di Porto Faro), Palau and many others that we will make you discover during your holiday in Sardinia. There are also hundreds of these rocks in Capo Testa's Moon Valley (Valle della Luna di Capo Testa), Santa Teresa Gallura (main picture).

So, is it over now? Not yet! If you find any rock with striking shapes, send us your selfie with the rock in the background to info@wonderfulsardinia.com and we will publish your picture on our official Facebook page.