5 different ways of living Sardinia in close contact with nature

5 different ways of living Sardinia in close contact with nature

Where is that place where you can find endless white sandy beaches and cliffed coasts, mellow hills covered in Mediterranean scrub, dramatic mountains topped with snow, sandy desert and Europe's largest canyon, a plateau inhabited by unique indigenous wild ponies, a large number of caves to be explored and a place where millennia of strong winds have carved rocks into the shape of Gothic cathedrals?


The answer is simple: Sardinia!
Here you can find everything a lover of nature might desire and among all the different options, we have selected 5 especially for you.


For starters, you can visit some the many protected areas which are ideal locations for Birdwatching, such as on the Island of Saint Peter's (Isola di San Pietro), protected by the WWF; there you can see up to 100 couples of Eleonora's Falcon (Falco eleonorae), thus called in honour of the Sardinian Queen who banned them from being hunted in the XIV century, already understanding the importance of preserving certain species. Other protected areas are in the territories of Oristano, Cabras, the Molentargius park in Cagliari, Stintino and Platamona, Bosa and so forth. From north to south, you can admire around 330 different species of birds that nest on the island, such as herons, pink flamingos, cormorants, ibis as well different types of unique ducks.

For those who have a passion for Climbing and love to live nature in a more adventurous way, the Ogliastra territory, in the eastern part of Sardinia, has some spectacular cliffs, such as the Aguglia di Goloritzè, a rocky tower which raises from the sea and overlooks the beautiful beach of Cala Goloritzè. Moving inland to the Supramonte di Oliena, in the central Sardinian Barbagia territory, one can climb up Punta Cosidore, a chalky massif with a vertical face of around 400 metres, challenging even for the expert climbers.

If Trekking is your thing, you cannot miss a visit to the canyon Gorroppu, which acts as a natural border between the territories of Orgosolo and Urzulei for as much as 1.5 km and in some points is only 4-5 metres wide. This gully is surrounded by an aura of mystery and myth, like the ancient story according to which one can see the stars during daytime.
The longest hike, which is also the one suggested by the expert local guides is approximately 12 km, with up to 200 metres of altitude gap. In the territory of Oliena, if you want to join nature with archaeology, you can visit the Nuragic village of Tiscali, whose name comes from the adjacent 500 metre-high mountain. The village is protected within a karstic valley, whose peculiarity is indeed that of being surrounded by rocks. 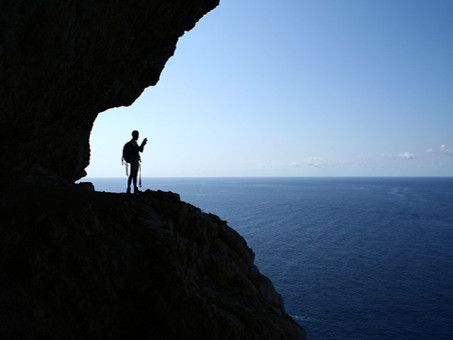 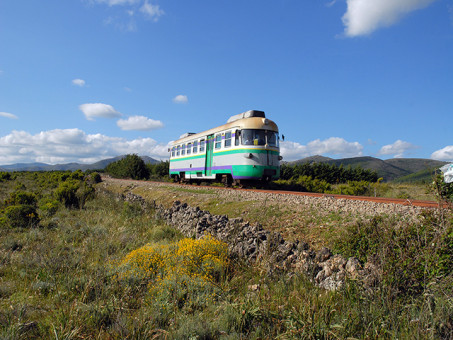 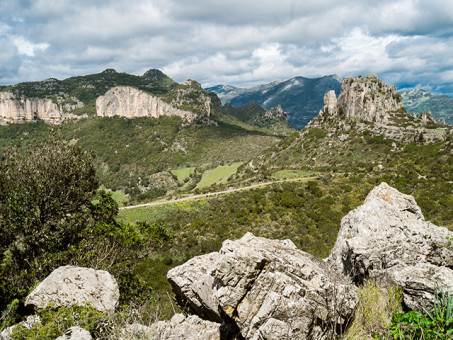 Another fascinating experience which should not be missed is certainly the Trenino Verde (the Little Green Train). This narrow-gauge track service is run by the Sardinian Railway Company (Ferrovie delle Sardegna) and allows you to visit the most remote and inaccessible areas of our territory on board an old steam train. Described in 1921 by the famous British writer D.H. Lawrence in his “Sea and Sardinia”, this service offers different alternative routes, all giving the passengers the chance to see landscapes which cannot normally be seen by traditional means of transport, e.g. the one from Monserrato to Mandas, from Mandas to Arbatax, on the east coast; from Macomer to Bosa, on the west and from Sassari to Palau, passing through Tempio in the north.

Finally, probably the “greenest” way to visit the island is Biking, especially popular with foreign tourists. This is the perfect way to fully enjoy all the scenery and smells that make Sardinian springs and summers so special and so surprisingly green, especially if you have only seen it during the summer holidays. The blinding bright yellow of the broom plants, the fields of red poppy and asphodels make for exiting and unique landscapes. The tracks and routes for lovers of bicycles are endless, on flat land, hilly but also mountainous terrains, for the most expert cyclists. An example of a possible itinerary, not too difficult and with a 800 metre altitude gap, is the one that starts from Tempio Pausania, the traditional capital of the Gallura province, and through forests and granitic formations leads all the way up the Limbara Mountain, whose peak reaches 1359 metres. From the highest point one can enjoy a breathtaking view of Gallura all the way down to the sea.


Another interesting itinerary, though more demanding, is the one that goes from the old mines of Arenas to the ancient Temple of Antas, of Punic origins, in the Sulcis-Iglesiente territory, in the south-west of the island. It is 59 km long and is both on made and unmade roads, running alongside the Marganai forest in the territory of Domusnovas, with altitude gaps of up to 1400 metres. It surely requires a certain level of fitness, but guarantees a rewarding and unique experience.

Early Booking in Sardinia: why it is so convenient
The 7 Unforgettable Experiences in the Emerald Coast
Sardinia in Helicopter: Transfers, Tours and Excursions
The 3 Best Excursions To Do in Olbia and San Teodoro