The Green Coast is probably the wildest Sardinian area, where it is still possible to find beaches – reachable through roads and not only by sea – far from any settlement.

Visit the green Coast means to delve into nature. An occasion to recharge yourself and rest your mind.

With a short break of only 4 days it is possible to unplug from stress and live an unforgettable experience.

DAY 1 – FROM CAGLIARI TO THE ITALIAN OLDEST CITY

Arrival at Cagliari Elmas airport. Pick up the rented car you booked and head to Sardinian southwest.

Heading south, it is possible to visit the island in the island: Sant’Antioco. The 4th largest Italian island (after Sicily, Sardinia and Elba) has only 12.000 inhabitants and is 85 km far from Cagliari. It is connected with Sardinia through an artificial isthmus.

The most inhabited district is Sant’Antioco, risen on the ruins of the ancient Phoenician-Punic city of Sulky – recently recognized as the Italian’s oldest city – surpassing Rome. In June 2014 an amphora from 800 BC was found there – a period where there were no other inhabited cities in Italy. This discovery makes Sulki one of the oldest centers of all central and western Mediterranean.

After Sant’Antioco head nord to Nebida and Masua.

In Masua there is Porto Flavia, an avant-garde engineering work considering it was planned as a hanging port. Built in 1924, this modern project consisted of two overlying galleries 600 meters long and a conveyor belt that brought the minerals from the subterranean deposits to transfer them into the ship’s hold using a mobile arm.

This invention revolutionized the mineral loading system used in that period that consisted in minerals carried on “carlofortini”’s (Carloforte natives) shoulders into their sailing ships.

The Sardinian Geomineral Environmental Historic Park (Parco Geominerario Storico Ambientale della Sardegna) became Unesco human heritage for its historic importance, considering that in the middle of the 900 years the local economy was based on mineral activities that represented 10% of the worldwide production of zinc and lead.

In front of Porto Flavia (uncommon name for a port, referred to the designer daughter’s name) it is possible to admire the Sardinian Sugar Loaf. A Calcareous sea stack 133 meters high.

Along the roads it is possible to see many unused “tonnare” (where tuna used to be cut and packed to be distributed and sold).

In the evening, check in at the hotel to enjoy a deserved rest. 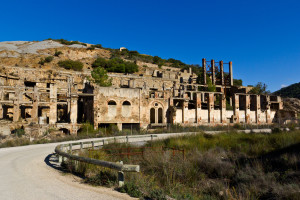 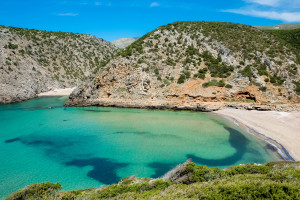 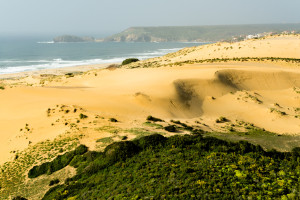 Wake up with no alarms. Have a relaxed breakfast and take the car to know more of the Green Coast.

This beach is between white calcareous sea stacks and it is also located in an ex-mineral zone. It is indeed possible to see the old mines buildings ruins, so as the ware and stock houses but also galleries, so as the one that leads to Caletta creek, a very intimate and protected beach.

Driving back in Guspini direction, it is possible to make a tour in Monte Linas, where the Sardinian deer lives. For the experts, it is interesting to make the Monte Arcuentu climbing, a volcanic massif formed by massive walls originated by solidified lava flow, that offers a breathtaking panorama from the top.

For a more relaxing tour, take a walk in Santa Maria di Neapolis pond, a perfect habitat for the pink flamingo.

Another choice can be reach the top of Cuccuru Zeppara and appreciate the unique forms of basalt, created by particular conditions during the cooling of the lavic flow, making them look like giant canes of an organ.

You can have dinner at the village, choosing amongst the local specialties. Begin with the bread, here called “su Pani Mannu” (the big bread), similar to Cagliari most known bread “su civraxiu” with a hard dark crust. It is served as a side to local dishes that originates from poor recipes prepared with what people had at home or in the backyard. Tuna and fava beans, beans with beacon, vegetable soups seasoned with lard, ricotta and spinach ravioli with saffron, dishes prepared with vegetables from the own vegetable garden and meat people had in the backyard, seasoned with olives, artichokes and olive oil. A must be is the “malloreddus”, small typical gnocchi that recalls Campidano’s (Sardinian area) wheat (once this part of Sardinia was considered the Italian wheat belt.

DAY 3 – PISCINAS AND THE BIGGEST DESERT IN EUROPE

Enjoy breakfast at the hotel and then head to Piscinas for a day devoted to a close contact with nature. This special place is only 27 km from Guspini, and there you can see dunes amongst the highest ones in Europe that can be 60 m high and decrease towards the sea.

From Guspini go in the direction of Montevecchio (6 km) and check for road signs to Piscinas beach. There are 10 km of dirt road and remember to refuel before Arbus as there are no gas stations close to Piscinas.

The beach is wild, 7 km of golden sand. There is one bar. The perfect place to relax in close contact with nature. The dunes seem to be alive as they are always shaped by “maestrale” wind and are part of the biggest European desert.

The sea tends to be agitated along this part of Sardinia, what makes this beach a desired destination for surfers.

Going south you will find the Scivu beach, one of the most uncontaminated sites as there are no settlements in the surroundings of this area.

Return to the hotel after a day dedicated to nature and, after taking a bath, have dinner in a local restaurant. Maybe it can be the perfect occasion to taste the local artisan raw beer, produced in Montevecchio village.

DAY 4 – ANOTHER BEACH BEFORE DEPART

After a relaxed breakfast, check out and carry the luggage in the car. Before returning to Cagliari, visit Marina di Arbus, a beach 2 km long with red colored sand because of iron. Perfect for children for its low depth.

Head a little bit nord to see Torre dei Corsari beach, used by Spanish during XVII century as a sight point against the Saracen pirates intrusions.

Time to head to Cagliari to take the returning flight. Surely recharged with so much nature and convinced that, once you meet Sardinia, you cannot avoid it anymore.

Sardinian holidays : discovering Ogliastra
Special Deals: How to find the best hotels at the best prices in Sardinia
The Best Villas for your Holidays in Cannigione – Costa Smeralda
Sardinia in Helicopter: Transfers, Tours and Excursions