The Emerald Coast became more known than Sardinia itself. It was born from an idea of Prince Aga Khan in 1962. One of the poorest areas of Sardinia became its flagship, putting Sardinia amongst the most desirable international jet set destinations.

The name Emerald Coast was suggested by Arch.Luigi Vietti, inspired by the magic colors of the Sardinian transparent sea surrounded by granitic rocks that looked like plastic sculptures, according to him.

Thanks to this project, today many tourists can admire all the beauties of these 55 km of coastline that otherwise would be probably wild land.
In 4 days you can know a good portion of this special destination right in the middle of Mediterranean sea.

Arrival at Olbia Costa Smeralda airport. Rent a car or contact us for a private transfer and go straight to refresh yourselves in a beach you find in the way to the hotel. While waiting for the check in time, you can enjoy Liscia Ruja beach (also called Long beach) where you can even eat and drink at the Long Beach Cafè.


Later, relaxed after sea and sun bathing go to the hotel to take a bath and go for a walk to know Porto Cervo and its “piazzette” (small squares), where you’ll find shops of the best Italian and international brands so as bars and restaurants.

You can visit the Stella Maris church, a project by Michele Busiri Vici, where you can see the Mater Dolorosa from '500 by El Greco – Domenico Theotocopulos, a Greek artist of the Renaissance so as Pinuccio Sciola sculptures.

In the evening you can eat a pizza at Pomodoro, a traditional local restaurant & pizzeria where Costa Smeralda habitues use to go often.

Did you forget to switch off the alarm? No problem because you’ll have the opportunity to smell the Sardinian fresh air of the morning that smells of elicriso, a local typical flower (some people smell its perfume as soon as they arrive at the airport).

Take some sandwiches and fruits (or eat at the beach bar) and dedicate a whole day to the sea at Piccolo Pevero beach. Transparent water and a beach with common services where you can rent beach chair and umbrellas.

In the afternoon, go back to the hotel, take a shower and head to Baja Sardinia, to drink a mojito at the Phi Beach, mentioned in New York Times as one of the 10 sunsets in the world one cannot miss at all.

Later you can have dinner in one of the pleasant restaurants in the cute Baja Sardinia village. 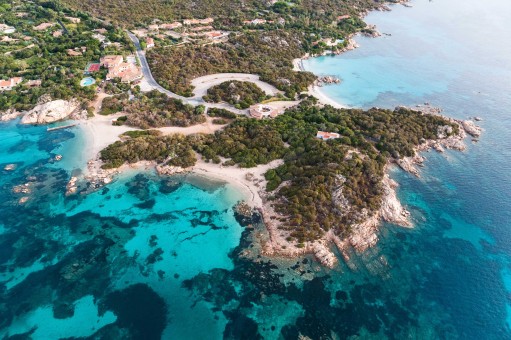 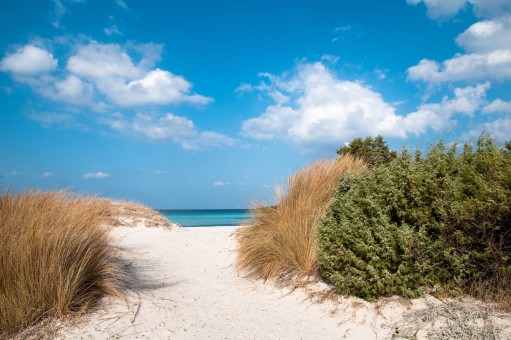 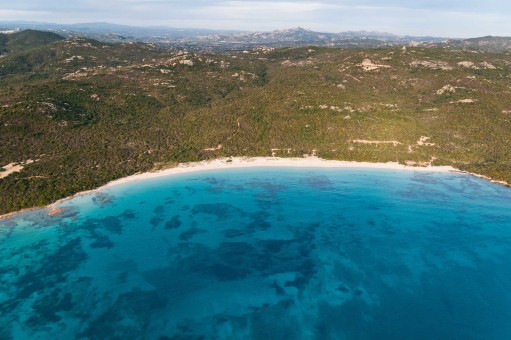 No hurry, no worry, you’re in Sardinia. Lazy wake up and, after having breakfast, go to Prince beach (spiaggia del Principe), one of the most beautiful ones in Emerald Coast. It is right after the Cala di Volpe hotel, to your left, before Capriccioli. Its name seems to be dueto the fact it used to be the favorite of the Prince Aga Khan. The sea is crystal clear blue and it is probably due to the sea bottom of granite and sand.

After move to Capriccioli. A Paradise angle with clear blue water where you will feel like being inside a paint, so beautiful the environment is.
In the evening, go to Porto Rotondo (round port). It is not officially part of Emerald Coast Consortium but it is a must when you visit this part of Sardinia. It resembles Porto Cervo, but being much more intimate as it was not created as Porto Cervo, but it was born amongst friends who began to call other friends to buy villas there. During the 80’ years, a lot of Italian and international actors and actresses like Virna Lisi were often seen walking along the port.

There are many choices for a drink or to eat something along Porto Rotondo squares and along the port walks.

It is easy to get used to the beach routine. Even if you have to check out, after breakfast, just put the luggage into the car, and go for a last plunge in the crystal Sardinian sea. Go to Rena Bianca beach, in the way back to the airport. A last plunge to make the promise of coming back soon for more.